Can gravity affect quantum systems? Quantum theory and gravity seem to apply to very different physical regimes. It is often argued that gravity is irrelevant on very small scales, where typical quantum phenomena are observed. But as has been shown in numerous experiments, gravity can indeed influence a quantum wave function of the smallest particles. Newtonian gravity from Earth can induce a quantum phase-shift for a particle that is in a superposition between two different heights. This was first demonstrated with Neutrons in the famous COW (Colella-Overhauser-Werner) experiment in 1975 [1].

What about Einstein’s gravity? If the Newtonian potential can influence a quantum wave function, what can one expect from post-Newtonian effects stemming from general relativity? It turns out that novel phenomena arise, with no classical analogue. Classically, two clocks placed at different heights will experience different proper times, and thus will be time dilated with respect to each other. But in quantum theory, an additional effect arises: If a single clock is brought into superposition of two heights, its internal degrees of freedom (or clock states) get entangled with its position [2]. The acquired “which-way information” affects the quantum coherence of the position.

In a recent publication [3], we showed that the effect of time dilation on quantum systems is very general and affects the quantum coherence of any composite quantum system. Time dilation is universal: it affects any system regardless of its structure or composition. Clocks are affected by time dilation as much as the heart beat or the half-life of a decaying particle. In fact, all composite quantum systems are affected, as they usually have a finite temperature or energy spread: there is usually some internal dynamics present within the system. If such a composite system is brought into superposition between different heights above Earth, as in the above example with a clock, time dilation will correlate all internal dynamics with the height of the system. And this causes decoherence of the center-of-mass if a sufficient difference in proper times is accumulated along the superposed paths. Quantum coherence is lost because of the relative time delay of the internal dynamics of the system, which becomes position-dependent due to gravitational time dilation. There is no “external” environment, only the presence of time dilation causes the system’s center-of-mass to decohere due to the dynamics of its own composition. The effect follows from two very basic concepts of quantum theory and relativity: time dilation and quantum superpositions.

Even though time dilation is very weak on Earth, the effect can already be relevant on mesoscopic scales: If a micro-scale object at room temperature is put into a micrometer superposition, then time dilation will cause decoherence on the order of milliseconds. This is because many internal degrees of freedom contribute to the effect. Each individually is affected by time dilation only a tiny bit, but for a larger composite system, the effect can become significant. For quantum systems, it is of course very challenging to prepare such large superpositions, and other decoherence effects will also be of importance. But there is a parameter range at superfluid Helium temperatures, where experiments with very large molecules or microspheres could in principle observe the predicted phenomena in the future. Importantly, the effect is universal and any internal dynamics will contribute to decoherence. Thus one can think of other possible experiments, utilizing any internal dynamics. Many basic concepts that enter the effect are also discussed in our pedagogical note [4].

Finally, what do we actually learn from this study? In our work, we do not treat the gravitational field quantum mechanically, thus there is no direct connection to “quantum gravity”. Yet, we study how quantum mechanical test systems behave on a background space-time, as opposed to classical test particles, and new effects arise. We found a new decoherence mechanism, but the most important aspect of the work is that the interplay between quantum theory and gravity has novel phenomena to offer. Our work shows one example, but this research direction is still widely unexplored: Many more possible effects and experiments on the interplay between these two great theories are waiting to be discovered!

Basic chemistry tells us that a bond between atoms can form if it is energetically more favorable for the atoms to stick together than staying apart. This fundamentally requires an attractive force between the atoms. However, new theoretical predictions show that the combination of a repelling force and controlled noise from an environment can also have the surprising effect of leading to a bound state, although one with quite exotic properties. The research team consisting of ITAMP postdoc Mikhail Lemeshko and former ITAMP postdoc Hendrik Weimer* report their results in the journal Nature Communications [1]. 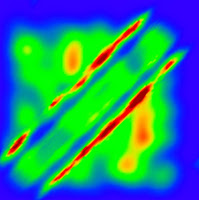 How is it possible that repulsion and noise, both two effects countering the formation of a chemical bond, can lead to a bound state nevertheless? To understand this, one has to take into account the quantum properties of the atoms: adding controlled noise to a quantum system can result in an interference phenomenon that traps the atoms in a well-defined quantum state. The repulsive force then ensures that this trapping occurs at a particular distance, which sets the length of the bond. The nature of the novel bound state is strikingly different from their chemical counterparts. For example, the bound state is remarkably robust and can hardly be broken by depositing a constant amount of energy to it.

Lemeshko and Weimer consider one of the most basic and universally available sources of noise: vacuum fluctuations of the electromagnetic field. In the past, the techniques making use of these quantum fluctuations have led to dramatic improvements in laser cooling, culminating in the results that were awarded the 1997 Nobel Prize in Physics. The authors believe that the first applications of the discovered binding mechanism might be in the area of cooling of atomic quantum gases.

*presently at the Institute for Theoretical Physics at Leibniz Universität Hannover, Germany

The ongoing quest on achieving high-density samples of dipolar atoms and molecules aims at observing the exciting many-body phenomena predicted in such systems [1].

In the recent article in Physical Review Letters [2], the authors from ITAMP, George Mason University, and the University of Hamburg, introduced an alternative platform for quantum simulation of many-body systems. The proposed setup is based on nonspherical atoms or molecules with zero dipole moments but possessing a significant value of electric quadrupole moments.

Considering a quadrupolar Fermi gas trapped in a 2D square optical lattice, the authors showed that the peculiar symmetry and broad tunability of the quadrupole-quadrupole interaction results in a rich phase diagram encompassing unconventional BCS and charge density wave phases, and opens up a perspective to create a topological superfluid.

Quadrupolar species, such as metastable alkaline-earth atoms and homonuclear molecules, are stable against chemical reactions and collapse and are readily available in experiment at higher densities compared to the dipolar atoms and molecules. 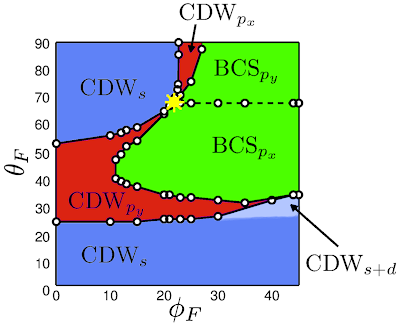 Quantum computers can solve certain problems much faster than their classical counterparts, but their realization on a scale relevant for practical applications has proven to be very difficult. However, this could change with a new method for solid state quantum computers devised at ITAMP. We report our results in the journal Physical Review Letters.

While controlling single quantum bits ("qubits") is nowadays possible with high precision, the realization of large networks with many qubits remains an outstanding challenge. This is particularly relevant for devices based on magnetic impurities in solid state systems, where the magnetic interaction between the qubits is too weak. However, the research team could now show that this obstacle could be solved by grouping about 100 impurities to form a single collective qubit. When an external magnetic field is chosen correctly, the magnetic properties of the impurities lose their individual characteristics and become indistinguishable due to their quantum nature. Such collective quantum states are known to show drastically increased interaction strengths, allowing to perform faster quantum logic operations between the collective qubits. 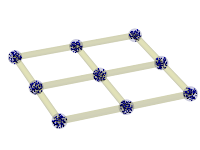 While the proposed method is applicable for a large class of solid state qubits, the scientists present a detailed analysis for nitrogen-vacancy defect centers in diamond, demonstrating the realizability of much larger quantum networks. As few as 50 collective qubits are sufficient for immediate applications in the simulation of strongly correlated quantum systems.

Posted by Hendrik Weimer at Friday, February 08, 2013 No comments:

This year the International Conference on Atomic Physics was hosted by École Polytechnique in Palaiseau near Paris, France.

Building a crystal out of quantum bricks

Preparation of strongly interacting many-body phases starting from a weakly interacting quantum gas is known to be very challenging. It involves crossing a phase transition, where the energy gap protecting the ground state becomes vanishingly small for large systems. In a recent publication in Physical Review Letters, we report on a recipe to overcome this problem. In our work, we study the formation of dipolar spin crystals of ultracold polar molecules trapped in an optical lattice. We demonstrate that one can achieve a substantially better growth of the emergent spin crystal using non-adiabatic driving of rotational transitions.

Our proposed technique builds on the dipole blockade of microwave excitations. In the context of an effective spin-1/2 model, the dipole blockade allows to flip particular spins in an optical lattice without a need for single-site addressing. The growth of the spin crystal is started by a short sequence of microwave pulses that create a few flipped spins, serving as a nucleation center of the crystalline phase. After that, continuous microwave driving propagates the boundary of the crystal, adding one additional flipped spin after the other.

We investigate the dynamics under the continuous driving and demonstrate that the growth of the ordered domains is efficient. The analysis of the imperfections and the required experimental parameters shows that structures consisting of more than 1,000 spins can be grown. The average size of the resulting domains scales substantially more favorable compared to the conventional adiabatic preparation. 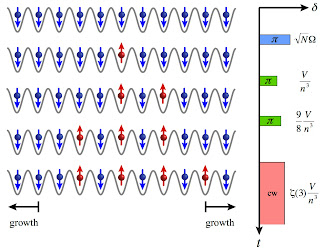 
About the authors: Misha Lemeshko and Hendrik Weimer are the ITAMP Postdoctoral Fellows at the Harvard-Smithsonian Center for Astrophysics and Harvard Physics Department; Roman Krems is an Associate Professor of Chemistry at the University of British Columbia in Vancouver.
Posted by Lemeshko at Monday, July 16, 2012 1 comment: